The Last 24 – A Virtual Journey To The Cross

The Last 24 – A Virtual Journey To The Cross 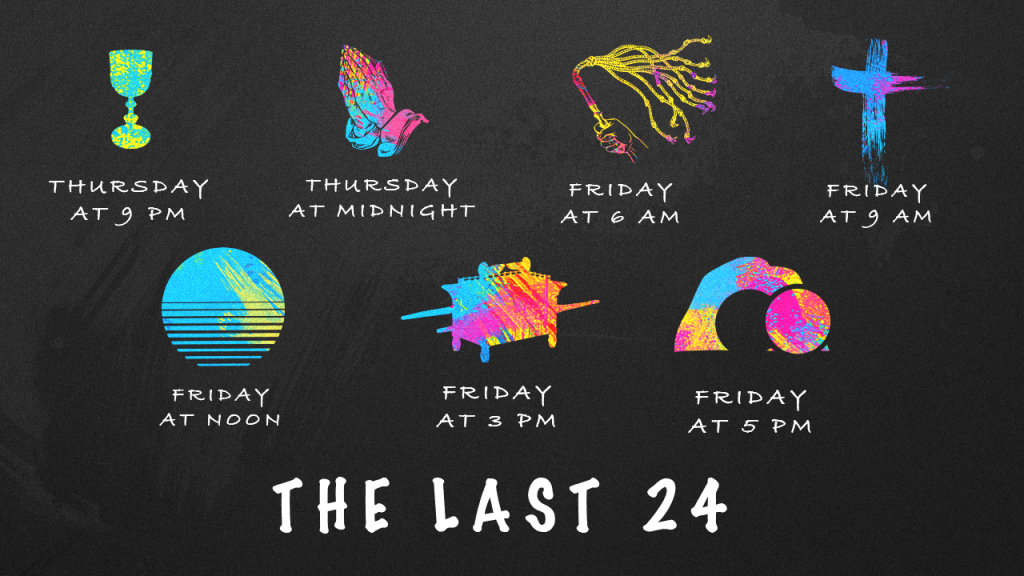 Come along with us as we walk through the final twenty-four-hours of Jesus’ life. Follow us through 7 different times starting from the upper room to the empty tomb as we get a sense of what it must have been like in those desperate hours.

We will post a video with a brief devotion at each of the following significant times on this spiritual journey:

There is no better way to prepare our hearts for Resurrection Sunday!

Scene: The Upper Room
The cross was less than 24 hours away…but the disciples didn’t know it. Little did they realize as they assembled to celebrate the Passover, that they were sharing the Passover WITH the Passover. Jesus shared things with them that would be passed down for millennia…

Scene: Trials of Jesus
By 6am on Friday, Jesus had been accused and abused for hours. The illegal trials culminated with a demand to the Roman Governor to execute him. In a desperate attempt to dissuade them, Pilate, the governor offered to exchange the most guilty criminal in the system for Jesus. They would not hear of it…

Scene: Crucifixion
9 am. It was official. Jesus was to be executed, swiftly and certainly. Handed to the Roman guard, Jesus was abused further and then shoved toward the place of execution…Golgotha – the place of the skull.

Scene: Noon – the sun goes Dark
Noon. Jesus’ birth had been marked by a cosmological miracle – a star that lit up the night sky. At His crucifixion there was an equally strange event: the sunlight went dark! Just like that, gloom descended. It is almost as if nature was making commentary on the coming and going of its Creator…

Scene: 3pm Death
3pm. Jesus had hung, suspended between heaven and earth, for six hours. In the unnatural gloom of mid afternoon the Savior would cry His last cry and yield up His spirit for us. It. Was. Finished.

Around 5 pm Jesus was officially pronounced dead. Jesus’ swift death surprised Pilate, the governor. It devastated Jesus’ followers. Friends came to retrieve the body and prepare it to be buried. As the stone was rolled over the tomb, it seemed like their world had come to an end…